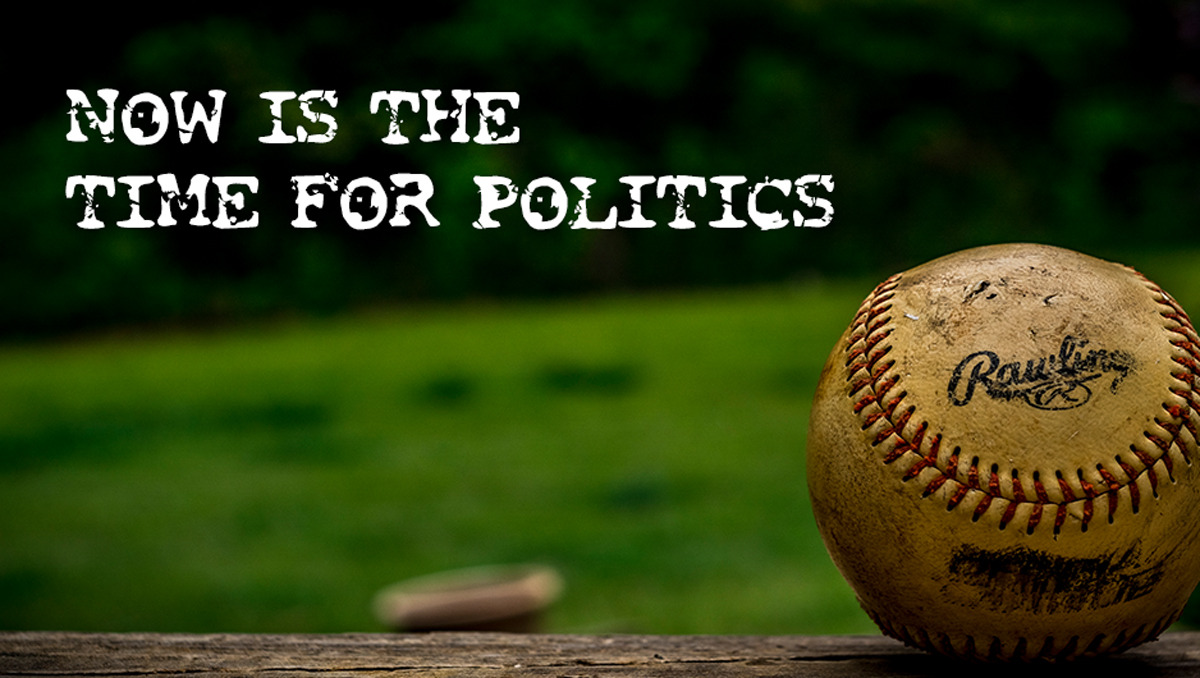 Now Is The Time For Politics

As with every mass shooting in America, only more so, the cry went up last Wednesday following the attack on Congressional Republican members at a practice for a charity baseball game:

Disgusting. Not a day for politics. https://t.co/Kv3H9kshNY

(Whitbeck is the chair of the Republican Party in Virginia.)

We may have our differences, but we do well, in times like these, to remember that everyone who serves in our nation’s capital is here because, above all, they love our country.

We can all agree that we are blessed to be Americans, that our children deserve to grow up in a nation of safety and peace, and that we are strongest when we are unified and when we work together for the common good.

– Trump’s statement on the shooting

I ask each of you to join me in resolving to come together…to lift each other up…and to show the country — show the world — that we are one House. The people’s House — united in our humanity.

– Ryan’s statement on the shooting

And as always, thoughts and prayers were on offer for the victims.

Rep. Steve Scalise of Louisiana, a true friend and patriot, was badly injured but will fully recover. Our thoughts and prayers are with him.

My thoughts and prayers are with my colleague, Steve Scalise, and the Capitol Police and staff shot today at a ballpark. Awful news.

Half a world away, thoughts and prayers were also being sent out to those who lost their lives and homes in the London fire at Grenfell Tower, a 24-story apartment building that burned early Wednesday morning, about 12 hours before the Alexandria shooting. But unlike in America, the response didn’t end there.

Both Labour politicians and Prime Minister Theresa May called for immediate inquiry into the causes of the fire; the media discovered warnings from the residents about the building’s safety issues that went unheeded and a report on recommendations for fire safety for the building that was ignored by May’s new chief of staff; discussions ensued between the press, the London Mayor, and others on issues of public housing, safety, and corporate responsibility.

The distinction is clear. In Britain, when a horrifying event happens, in addition to thoughts and prayers, people try to figure out why it happened, who is responsible, and how it can be fixed. In America, our thoughts and prayers have no company but the entreatment that we stop disagreeing and put politics aside. That this is not the time for politics.

But this is precisely the time when politics is needed most. Because politics is how we solve problems. It’s how we resolve disputes peacefully, using words instead of bullets. It’s the means by which we determine what we care about and how to protect it; what we hope for and how to achieve it; what we fear and how to prevent it. Politics at its worst is sports with consequences, and it is the playing of sports with human lives that must end (end, not merely be temporarily called on account of tragedy). Politics at its best is simply our best and brightest, guided by the public through the methods of democracy, coming together to do things better.

What this shooting demonstrates, like all other mass shootings in America, is that we have a lot of problems that desperately need solving. The reason we haven’t solved them yet is that we’re not letting politics work. We’re too busy playing sports. And this is how we play:

1. “If she gets to pick her judges, nothing you can do, folks. Although the Second Amendment people — maybe there is, I don’t know.” - Donald Trump

One of the most insidious trends in recent politics is the rise of gibberish. Trace this back through Trump to Palin, Queen of the Word Salad:

“I’m in it, because just last week, we’re watching our sailors suffer and be humiliated on a world stage at the hands of Iranian captors in violation of international law, because a weak-kneed, capitulator-in-chief has decided America will lead from behind. And he, who would negotiate deals, kind of with the skills of a community organizer maybe organizing a neighborhood tea, well, he deciding that, “No, America would apologize as part of the deal,” as the enemy sends a message to the rest of the world that they capture and we kowtow, and we apologize, and then, we bend over and say, “Thank you, enemy.” We are ready for a change. We are ready and our troops deserve the best. A new commander-in-chief whose track record of success has proven he is the master at the art of the deal. He is one who would know to negotiate.

In some obscure way this kind of unspeak (Orwell would plotz) actually contributes to these politicians’ popularity. Trump “tells it like it is,” he talks (supposedly) like the common man–or at least the common 71-year-old man in mental decline. Currently one defense of Trump’s potentially criminal actions is that he doesn’t really mean what he says. “Take him seriously but not literally,” as they say.

But words do matter. The framing of our rhetoric shapes the tenor of the times. When everything is us versus them, my team against yours, our politics becomes combative. And when that rhetoric turns violent–when Trump praises murderers and drops unsubtle hints urging the assassination of his political opponents, when Ted Nugent can tell President Obama to suck his machine gun and earn a White House visit–the result is a politics that turns violent, too. You can’t sit down and solve problems with the people you say should die, or the people who say you should die; you can only try and hate them, louder and louder until some sick individual answers the call. “Second Amendment solutions” aren’t. They just make things worse.

“Winning is the most important thing in my life, after breathing. Breathing first, winning next.” – George Steinbrenner – owner and managing partner, New York Yankees

Politics is meant to be the art of compromise, a system where individuals reason and persuade and work together to achieve a result that best satisfies competing interests and ideals among the public. But thanks to gerrymandering, self-sorting, the electoral college, and staggering Republican intransigence, the majority party has total control of the government despite minority popular support. I don’t know why the gunman opened fire last Wednesday, but I know how violence can be precipitated by the perception of powerlessness. The combination of our winner-take-all system of government and the win-at-all-costs mentality present in the current ruling party can create that sense of powerlessness.

The very least you could do in such a situation, if you were the ruling party, would be to take a page from the Democrats’ book and bend over backwards to be transparent and bipartisan. Instead Senate Republicans are crafting their version of the AHCA in total secrecy–no Democratic input, no amendment process, zero debate. This isn’t a baseball playbook, to be hidden from one’s rivals to preserve the element of surprise on the field; it’s legislation that impacts tens of millions of Americans and 1/6th of the economy, repealing a law signed by Obama after over a year of open debate, discussion, and GOP input.

This is not just despicable; it contributes to a sense of hopelessness among the party not in power. Incredibly, this held true among Republicans under Obama, who complained that the ACA was “rammed through,” who felt they had to take their country back despite controlling both houses of Congress and a majority of governorships, despite obstructing every major policy initiative for years, despite stealing a Supreme Court seat. But for Democrats the sense of powerlessness in government is accurate and total. No bipartisanship is possible.

This is why Republican calls for unity are a joke. If they wanted unity they would offer it. They would allow public and open debate of the Senate AHCA; they would ask Democrats what they wanted to change; they would trade policies for policies in fair exchange; they would practice the art of compromise. But they don’t. Because they don’t want unity, except on their terms. They just want an end to criticism and disagreement with their most disagreeable policies and their most worthy of criticism president. And Democrats can’t in good conscience acquiesce. And so the game goes on.

I’m not advocating violence of any kind. But the desperate and delusional fringe can be inflamed not just by rhetoric, not just by powerlessness, but by the sense that the system is fundamentally unjust. Trump and many people associated with or working for him are flaunting the law and, at least so far, getting away with it, thanks in large part to a Republican majority in Congress who refuses to hold them accountable. A week before the shooting, NSA Director Mike Rogers and Director of National Intelligence Dan Coats refused to answer questions posed to them by the Senate Intelligence Committee, Coats even admitting he had “no legal basis” to refuse. The day before the shooting, Attorney General Jeff Sessions also refused to answer questions before the same committee, citing some kind of magical future brand of executive privilege that doesn’t exist and cannot be scrutinized or overturned. Trump himself continues to contemplate further obstruction of justice. At some point justice has been successfully obstructed, and the rule of law no longer applies to the rich, the powerful, and the protected.

It is in this kind of environment that, to certain people, violent means of change becomes attractive. When democracy fails, when the wheels of justice turn too slowly or even seem to reverse their course, people turn to worse ways of affecting the system. Such an impulse is, in a sense, deeply American; it inspired our Revolution for independence from the British. But the genius of our American system was that it made peaceful revolution possible, by establishing a democratic process rather than a monarch. Trump is a president, not a king, and his people are employees, not liege lords, and all of them should be held accountable for their actions. Not least because it is safer for everyone if as a country we believe that justice is possible.

What’s happening while we’re busy playing ball? I’ll tell you: more than 30,000 deaths annually from guns, half of them homicides. Something like 100 mass shootings per year. Children, moviegoers, shoppers, students, soldiers, killed at random by the mentally ill, by the deeply unhappy, by men who feel they have no other options. No other nation on Earth lives like this, no other civilized society accepts this level of blood due to sheer political obstinance. When Australia had their mass shooting at Port Arthur, they passed strict gun control laws and it solved the problem. Why can’t we do that here in America?

As a country we watch these shootings on the news again and again–there was another one the same day as Alexandria–and we’re scared and we’re horrified and we think and we pray and in the end nothing changes. Because it’s always the seventh inning stretch in America, and the game’s not over yet.

Kyu Saiewitz
Kyu Saiewitz (they/them) is the Founder and Senior Managing Editor of Torchlight Media. They also write and podcast about film and other pop culture at We Have Always Lived in the Kraken. A USC alum and screenwriter, Saiewitz currently lives in Austin, TX, where they own too many board games. Find them on Twitter @astaereth
583
Previous AHCA Stories: The Cost of Meds is the Cost of Living
Next Pride™