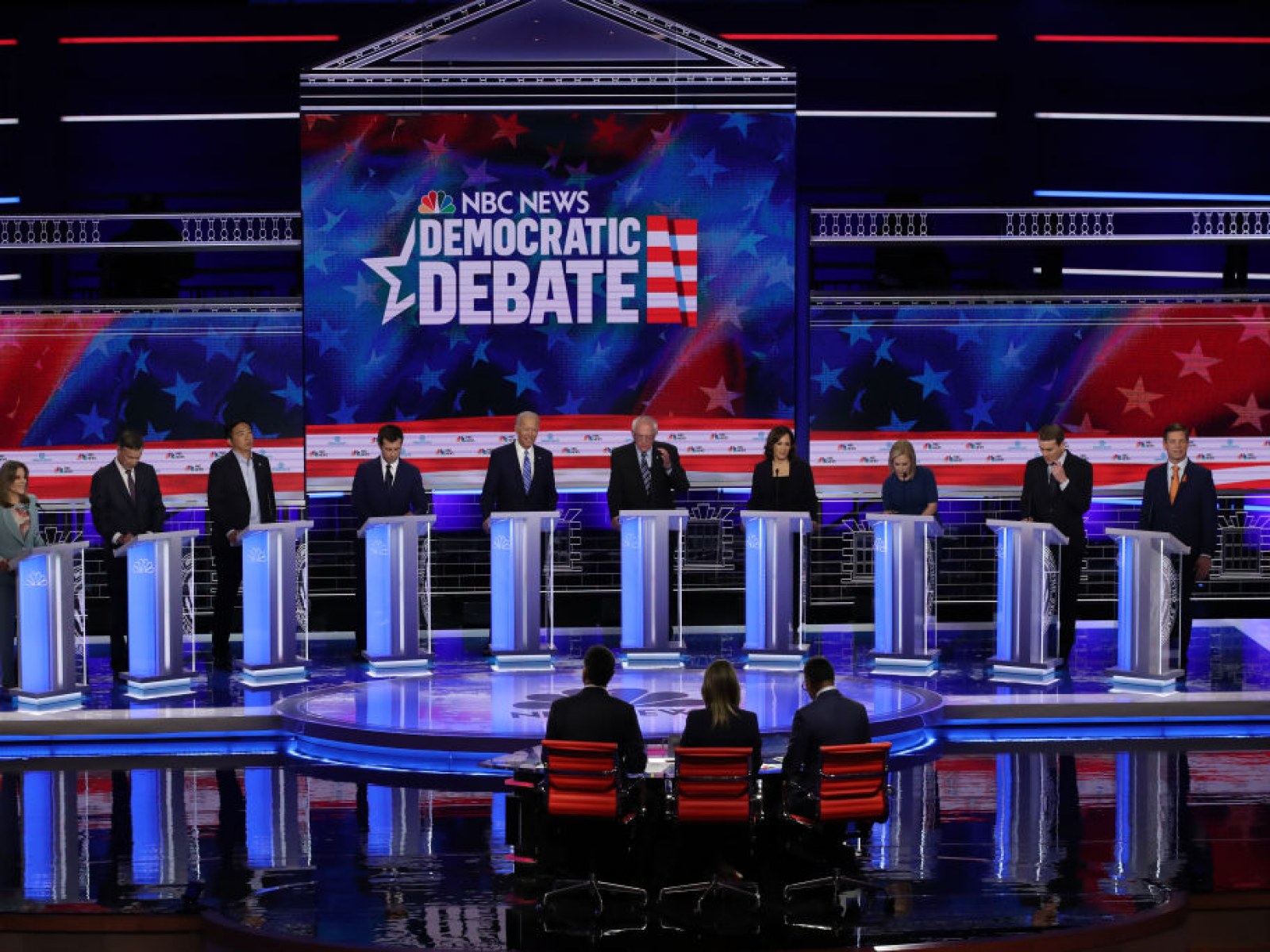 11 More Debate Questions that Should Have Been Asked

The first set of debates in the Democratic 2020 presidential primary has concluded, but we at Torchlight believe that NBC’s moderators missed a few important areas of inquiry for the second set of ten assembled candidates. We already listed questions for the first set of candidates. Here are 11 more questions we wish the second night debate participants had been asked:

1. “Senator Bennet, you’ve talked in the past about how your mother was born in Warsaw, Poland in 1938 to parents who survived imprisonment in the Warsaw Ghetto. Your mother survived the Holocaust, in fact, and your family emigrated to America in 1950. Today, immigrants fleeing to this country from hardship and oppression in Central and South America have been separated from their families and imprisoned in detainment centers in what has been described as inhumane conditions. Are these facilities concentration camps, and what would your mother and grandparents tell us we should do with the people who are being detained there?”

2. “Senator Gillibrand, on June 21st, The Cut published an excerpt from an upcoming book by writer E. Jean Carroll in which she describes an alleged incident in the mid-1990s in which Donald Trump raped her in a Bergdorf’s dressing room. In accusing Trump, Carroll joins at least 20 other women who have come forward alleging sexual assault or misconduct on behalf of the president, who famously bragged on audio tape about getting away with sexually assaulting women. What does it say about our country and our politics that these accusations are largely forgotten, that Carroll’s account did not receive much media coverage, and that Trump’s alleged sexual criminality is not part of the impeachment discussion?”

3. “Mayor Buttigieg, there are two current mayors in this race. Candidate Bill de Blasio is the current mayor of New York City, which has an estimated population of more than eight million people. You are the current mayor of South Bend, Indiana, a city with an estimated population of 102,000. No one in the history of this country has ever gone directly from being a mayor to being President, but let’s assume that a resume that contains only mayoral experience is sufficient for the presidency. Even given that assumption, why is your experience running South Bend, a town which is smaller, less diverse and less complicated, more valuable and more translatable to the job of President than Mayor de Blasio’s experience running America’s largest city?” 4. “Vice President Biden, on June 19th of this year, also known as Juneteenth, the House Judiciary Subcommittee on the Constitution, Civil Rights and Civil Liberties held a hearing to discuss H.R. 40, a bill proposing a commission be set up to “study and develop reparation proposals for African-Americans,” including considerations of both a formal government apology and potential financial restitution to help atone for not only American slavery but also systemic racial discrimination, from the Jim Crow era to redlining, much of which took place during your time in politics. Do you support H.R. 40, and what measures would you take, within or without the context of reparations, to try to close the racial wealth and income gaps that exist today in this country?”

5. “Governor Hickenlooper, consider for a moment two recreational substances, Substance A and Substance B. Consumption of Substance A results in nearly 90,000 deaths every year, while consumption of Substance B results in almost zero deaths each year. Substance A increases the incidence of spousal abuse, while Substance B is associated with lower rates of intimate partner violence. Both are dangerous to consume while driving, but Substance A increases the likelihood of being in a car accident by more than 2200%. Yet you sold Substance A as co-owner of the Wynkoop Brewing Company, while opposing the legalization for medical purposes and decriminalization of up to one ounce of Substance B in your home state, going so far as to say that if you had a magic wand, you would have reversed the decision made by the voters of Colorado. Governor, why couldn’t you think of anything more important to do in the event of you being given possession of a magic wand?”

6. “Mr. Yang, UBI, or Universal Basic Income, is a proposal in which every American receives a standard amount of money directly from the government. It is intended to provide a minimum income floor for individuals and families to relieve the stress and pressure of economic difficulties. It is not a new proposal–Martin Luther King Jr. supported the idea in the 1960s as a solution to poverty, and a version of UBI currently exists in Alaska, where an annual dividend of up to about $2,000 has been paid to every Alaskan citizen out of the state’s oil and mineral lease revenue since 1976–but UBI has renewed importance today because of the problem of automation, which has already impacted millions of workers and could replace 47% of today’s jobs. UBI could help move America toward a utopian vision of society, where people work less, where artists are free to pursue their craft, where parents can stay home to raise their children, where no one has to have two or three jobs to make the rent, where education is more affordable, where job transitions are less difficult, where the financial pressures on every American are greatly relieved. My question, Mr. Yang, is this: was that really so hard to explain?” 7. “Ms. Williamson, vaccines work by introducing a smaller, weaker version of a viral or bacterial infection into the body so that antibodies are produced which can then fight off a real version of this infection. Vaccines are one of the safest and most effective treatments in the history of medicine, saving the lives of millions of people and eliminating a number of serious diseases, some of which are now making a comeback due to people like you, who inflame skepticism of the scientific consensus on the safety and effectiveness of vaccination. You said earlier this month that, “When I’m president of the United States, there would be a commission of scientists learning so that the American people see what’s going on with these vaccines who are not paid by big pharma.” At this point in the 2016 presidential primary season, Donald Trump was also considered a joke candidate whose fringe views were memes and who would surely never win the nomination. Do you think our country’s prior experience with the unexpected and disastrous success of a kooky, self-promoting con artist will immunize us against propelling you any higher in the polls, or do you continue to dispute the effectiveness of vaccines?”

8. “Representative Swalwell, the generation gap seems wider today than it has been at any point since the 1960s. This is particularly true in the economic sense: according to a Federal Reserve report, Millennials, who are currently aged 23 to 38, have the same consumption preferences as earlier generations but “lower incomes, fewer assets, and less wealth.” Fewer Millennials can afford to buy cars and homes, Millennials are getting married later in life for economic reasons, they’re having children later in life. They’re more likely to be college educated and more likely to have student loans, loans whose median balance is 40% higher than that of the previous generation, yet this increase in education has not translated into an increase in earnings. Some argue that this is because we live under a gerontocracy, where younger people do not have sufficient political representation: by the end of 2020, the Boomer generation, who are currently aged 55 to 75, will have held the White House for the last 27 years; prior to the 2018 midterm elections, the average age in the Senate was 61.8 years, and 57.8 years in the House. With this in mind, Representative Swalwell, which of the following proposals to change the age makeup of our current political leadership would you support? 1) Lowering the voting age to 16; 2) lowering the minimum age for candidates for the Presidency to 30; 3) establishing a maximum age for candidates for Congress or the Presidency of 65.”

9. “Senator Harris, people on Twitter like to dismiss you by colloquially calling you a “cop,” but this shorthand does have some grounding in reasonable questions about your background in law enforcement as first a district attorney and then Attorney General of California. I want to focus on one instance in particular, involving transgender rights. At issue was a trans female prisoner named Michelle-Lael Norsworthy who sued the state after she requested and was denied gender reassignment surgery. There is a general scientific consensus that surgery is an effective treatment for gender dysphoria–the World Professional Association for Transgender Health, for example, says that surgery is “proven to be beneficial and effective” and “plays an undisputed role in contributing toward favorable outcomes,” and that in some cases “surgery is essential and life-saving”. During Norsworthy’s case, your office wrote a 29-page brief, signed by you, arguing that reassignment surgery was not medically necessary and therefore could be denied by the state. In January of this year, after you had announced your candidacy, you said in an interview that regretted the defense, saying, “There are unfortunately situations that occurred where my clients took positions that were contrary to my beliefs.” To what extent is a public servant accountable for their actions, regardless of their professed beliefs?”

10. “This next question, which we also asked last night, is for all of the candidates except for Vice President Biden and Senator Sanders. The Democratic primary process accords delegates to candidates on a proportional basis, rather than winner take all. However, candidates must receive at least 15% of the vote in a state or district in order to be awarded delegates. Other than Vice President Biden and Senator Sanders, each of you is polling well below 10% of the vote, making it likely that you will receive few, if any, delegates during this race. On the other hand, each of you has a sizable campaign staff and organization, as well as millions of dollars in funds. There are many crucial issues on which such an organization and such funding could make a difference, including shining public attention on the ICE immigrant detention concentration camps, not to mention helping Democrats win control of the House and Senate in the 2020 election. Could you better serve the nation by dropping out of the race now and devoting the rest of the time between now and the election to using your considerable resources and talent to make a difference on these issues, as compared to the dubious national benefit of yet another doomed presidential primary campaign?”

11. “Senator Sanders, why did the Occupy movement fail, and what makes that movement different from the political revolution you propose, besides you having not been at the center of it?”

Kyu Saiewitz
Kyu Saiewitz (they/them) is the Founder and Senior Managing Editor of Torchlight Media. They also write and podcast about film and other pop culture at We Have Always Lived in the Kraken. A USC alum and screenwriter, Saiewitz currently lives in Austin, TX, where they own too many board games. Find them on Twitter @astaereth
631
Previous 11 Debate Questions That Should Have Been Asked Last Night
Next The Darkness of Trump’s Immigration Policy