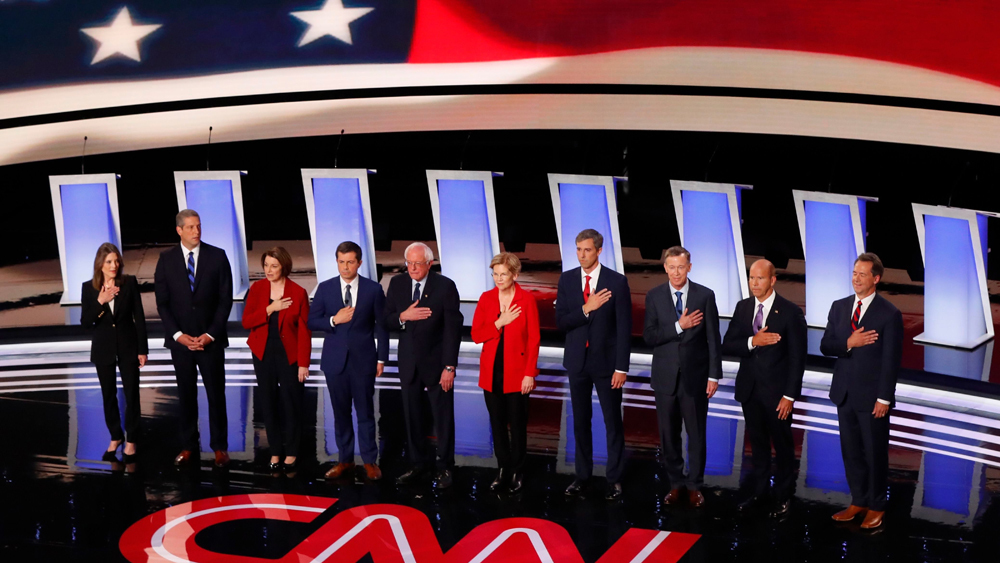 11 Debate Questions CNN Should Have Asked, Night One

The second set of debates in the Democratic 2020 presidential primary has concluded, but we at Torchlight believe that CNN’s moderators missed a few important areas of inquiry for the twenty candidates on stage. In part 3 of our continuing series, here are 11 questions we wish the first night debate participants had been asked:

2. Congressman Tim Ryan, you are a yoga and meditation enthusiast, you wrote a book about mindfulness, and tonight you told Senator Sanders that he didn’t “have to yell.” At a time when there are concentration camps on the border, an unindicted criminal in the White House, and 12 years left for humanity to save itself from climate change, what political circumstances would you say justify expressing passion and anger?

3. Mayor Pete Buttigieg, historically and currently the most neglected part of the LGBTQ community has been the T, even among the rest of the acronym. Trans people face immense challenges and widespread discrimination, resulting in harrowing statistics. When it comes to suicide, for example, in the entire US population, 4.6% have attempted suicide; that number rises to 10-20% for gays and lesbians; but in the trans community the rate is 41%, more than two out of every five. What will your administration do to improve the lives of these people?

4. Congressman Beto O’Rourke, some have suggested that one reason the American presidency is such a difficult job is that it actually combines two roles–a prime minister, who directs the party, proposes legislation, and oversees the executive branch; and a head of state, who conducts diplomacy, attends events, and acts as more of a cultural leader. Imagine for a moment that the presidency has been split into these two roles, and that you have been elected prime minister. Who would you choose to be your head of state?

5. Governor John Hickenlooper, in the 2006 film The Prestige, a magician’s assistant tells him not to hide his deformity, that he “must display it proudly,” because it makes him you unique. It is not widely known that along with up to 2.5% of the country you suffer from a condition called prosopagnosia, commonly referred to as “face blindness,” which makes it difficult for those with this condition to socialize with and remember other people. It must be acutely impactful for a politician, whose job is to know and speak with and foster relationships with a great many people. What is your opinion on displaying one’s differences proudly versus quietly surmounting them?

6. ​​Congressman John Delaney, you’ve said that you are, quote, “A much better dealmaker than the current president, both as a businessperson and as an elected official.” This was in the context of your criticising the Iran nuclear deal, which you said you would re-enter as President but which you also promised to negotiate tougher terms on. You’ve also argued that it’s irresponsible for other candidates on this stage tonight to offer what you call “fairy tale economic” policy proposals, calling for “real solutions.” If politics is built around compromise, whether with Iran or Congressional Republicans, isn’t it a viable negotiating strategy to stake out an early extreme position, to ensure you end up with a better deal, compared to starting with a more reasonable or centrist position and then compromising from there? 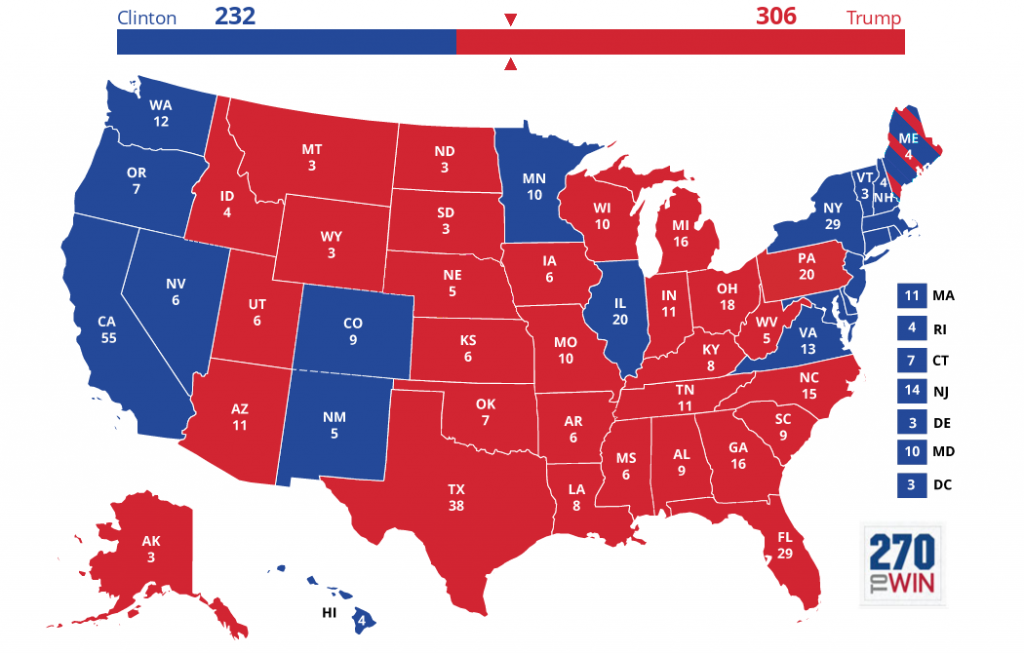 7. ​Senator Amy Klobuchar, you’ve frequently made an electability argument based on your being from the Midwest, a region Democrats mostly lost in 2016. One study in 2013 found that, while “presidential candidates generally receive a large, statistically significant home state advantage,” “a presidential […] home state advantage has not changed the outcome of any presidential election since 1884.” Even assuming your argument has merit, why should voters choose you for your home state advantage, since Hillary Clinton won your state, Minnesota, and its 10 Electoral votes in 2016, over the home state advantage of Governor Bullock (Montana, 10 votes), Mayor Buttigieg (Indiana, 11 votes), Tim Ryan (Ohio, 18 votes), or Secretary Castro and Congressman O’Rourke (Texas, with a whopping 38 votes), all of whose home states Clinton lost in 2016?

8. ​Ms. Marianne Williamson, in one of your books you described the AIDS virus as “Angels-in-Darth-Vader-Suits” and suggested sufferers “Imagine the AIDS virus as Darth Vader, and then unzip his suit to allow an angel to emerge.” “See the cancer cell or AIDS virus in all its wounded horror,” you wrote, “and then see a golden light, or angel, or Jesus, enveloping the cell and transforming it from darkness into light.” You’ve also said that sickness is a sin, calling it a sign of “our judgment on ourselves,” an “illusion” that “does not actually exist.” Darth Vader does not actually exist, but in the Star Wars films he demonstrates appalling behavior, from kidnapping his daughter and cutting off his son’s hand to leading a fascist organization responsible for the destruction of an entire planet and its billions of innocent inhabitants. Which of the following people are worthy of redemption for the things they’ve said or done: a) Darth Vader, b) Donald Trump, c) AIDS patients, d) yourself? 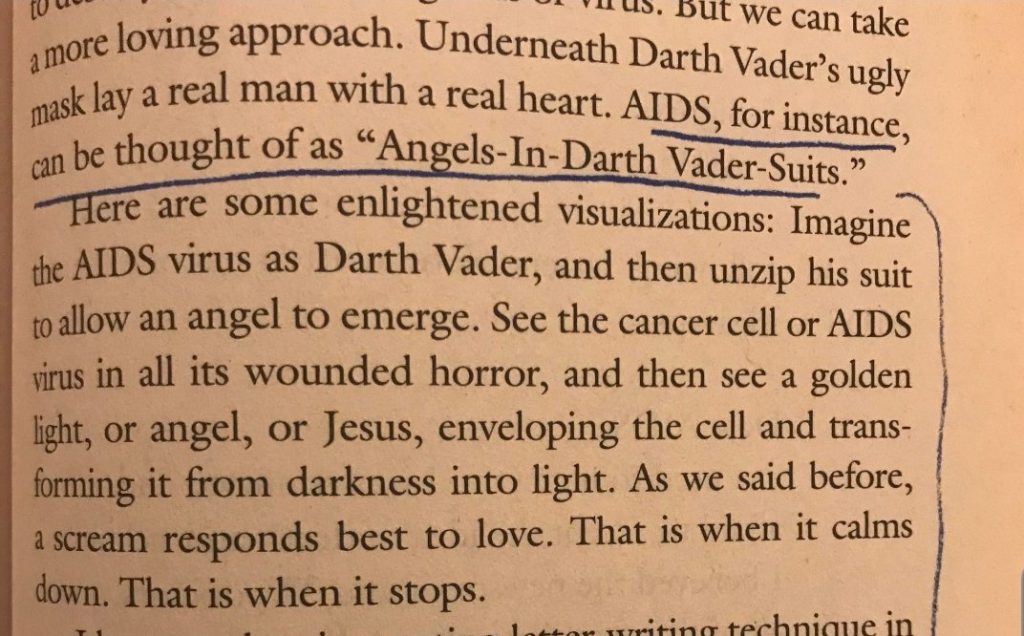 9. ​Senator Bernie Sanders, you’ve called for a political revolution of supporters to bring politicians who agree with your viewpoint into power with you. Many had hoped that President Obama’s winning coalition in 2008 would likewise empower the Democratic Party, but over the course of Obama’s eight years the party lost over 1,000 seats at the state and federal level, leading to criticism that as something of a party outsider, President Obama succeeded despite the electoral arm of the party and then failed to remake or fully support it. You serve in the Senate as an Independent, not a Democrat, and have had what some might call a contentious relationship with the Democratic Party in recent years. If you win the Presidency, how do you transition from that outsider, independent status to actually being the leader of that party? How would you reform the DNC to ensure that Democrats gain power, rather than lose it, over your potential two terms as President?

10. ​As of tonight’s debate, only half of you on stage have already qualified for the next round of debates in September: Senators Sanders, Warren, and Klobuchar, Congressman O’Rourke, and Mayor Buttigieg. In order to qualify, the rest of you need at least 2% support in four polls and 130,000 unique donors. Since the public has already heard from you and not yet given you enough polling or financial support, what would you add to the conversation at the next debate that you haven’t already said so far?

11. ​Governor Steve Bullock, in the last debate, you asked Vice President Biden to “pass the torch” to a younger generation. Would you care to expand on that now?

Kyu Saiewitz
Kyu Saiewitz (they/them) is the Founder and Senior Managing Editor of Torchlight Media. They also write and podcast about film and other pop culture at We Have Always Lived in the Kraken. A USC alum and screenwriter, Saiewitz currently lives in Austin, TX, where they own too many board games. Find them on Twitter @astaereth
443
Previous Roundtable – More Shootings
Next 11 More Debate Questions CNN Should Have Asked, Night Two