On the night of his impeachment, Trump appeared at a rally in Battle Creek, Michigan, an expected swing state for the 2020 election. In offhand remarks, he went low, even by his standards, and suggested that late Congressman John Dingell of Michigan was in Hell. John’s widow Debbie Dingell has held her husband’s former seat since he retired in 2015 and currently faces her first holiday season without her love and partner. She responded honestly about the raw emotional wound Trump’s callousness had caused:

Mr. President, let’s set politics aside. My husband earned all his accolades after a lifetime of service. I’m preparing for the first holiday season without the man I love. You brought me down in a way you can never imagine and your hurtful words just made my healing much harder.

This whole thing is tapping into my own past grief-trauma and is heart wrenching. I don’t want to let this stand as yet another moment Trump does something despicable, while we all wag our fingers, or rage, but do nothing more. I’m tired of impotence in the face of Trump’s atrocities. I want to change that negative into a positive by showering Debbie Dingell with support. I want to show her that, in these divided times, Americans still care about each other.

John Dingell served Michigan in the U.S. House of Representatives from December 1955 to January 2015, the longest-ever serving member of Congress. He was one of the last two World War II veterans to serve in Congress, the other retiring the same year he did. John’s time in office spanned the presidencies of Dwight D. Eisenhower, John F. Kennedy, Ronald Reagan, and Barack Obama. In his final years, he turned to Twitter, providing witty and insightful posts, some critical of the current president. He garnered quite a following. Right up until the end, he was bright and sharp, communicating on social media, sometimes dictating to his wife, Debbie Dingell. In February 2019, on the last day of his life, he dictated a last-words op-ed to Debbie, which was published in the Washington Post, and said some words even more applicable to the present moment:

It’s an expression that has always grated on me. In democratic government, elected officials do not have power. They hold power — in trust for the people who elected them. If they misuse or abuse that public trust, it is quite properly revoked (the quicker the better).

I never forgot the people who gave me the privilege of representing them. It was a lesson learned at home from my father and mother, and one I have tried to impart to the people I’ve served with and employed over the years.

As I prepare to leave this all behind, I now leave you in control of the greatest nation of mankind and pray God gives you the wisdom to understand the responsibility you hold in your hands.

When John Dingell announced his retirement from Congress, his wife Debbie ran for and won his seat. She has served in the House of Representatives since. If you followed any of John’s posts, one thing was crystal clear: Debbie and John loved each other dearly and were partners and soulmates in all things. After his passing this year, Debbie threw herself into her work, perhaps to help cope with her grief and perhaps as a tribute to John, by devoting herself even more fully to that which was his life’s work. Everywhere I looked this year in Michigan or in Washington, DC, Debbie was there. She was fierce and inspiring. She spoke at the Recess Rally to address gun violence held in Detroit, Michigan this summer, as covered by Torchlight on Twitter. At the time, I remember being torn between wanting to hug her and marching behind her as we stormed Washington.

Earlier on Wednesday, before the impeachment vote, I saw a photo of Debbie walking with Nancy Pelosi, the two of them holding hands. The two have clearly known each other for years, but something about the way their hands were clasped was trying to tell me something. Pelosi, as Speaker of the House, was setting forth to preside over the impeachment vote, probably one of the most important moments in her long career. But, by the way they held hands, I felt like it was Nancy supporting Debbie more than the other way around. And I realized, it was because Debbie was embarking on one of the darkest periods in any person’s life, that first holiday without a cherished loved one, where grief repeatedly swallows you whole, even when you don’t expect it. 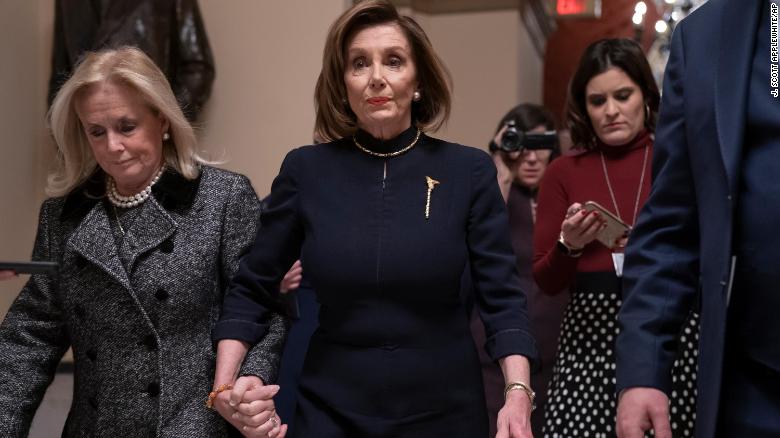 President Trump is a narcissistic bully whose staff engineered for him to appear in Battle Creek, Michigan, occupied by cheering crowds, and thus off Twitter, while the impeachment vote happened. As a bonus, the event sent a sanitized image to the brainwashed base of a strong president with grassroots support in the face of a supposed partisan Democratic hatchet-job. During the rally, Trump bragged, overstated, and outright lied about what he did for the Dingell family in the wake of John’s death. And then he suggested maybe John was looking up from Hell, not down from Heaven. This would have been vile at any time of the year, but it is particularly so now, as the raw emotion of Debbie Dingell’s response makes abundantly clear.

I have known a large number of people who have faced the pit of darkness that is the holidays after a loved one’s passing. As for myself, I have been losing relatives during the holidays since I was in college. I lost my mother between Christmas and New Year’s Day in 1987. My mother-in-law, whom I adored, died in February one year, just as John Dingell did this year, and I remember how hard it was for her husband, her sons, and all of us the following holiday season.

Debbie Dingell’s response to Trump has stirred up my own past trauma in dealing with the same time of year. I buried my mother on New Year’s Day before I was twenty-years old. I cried myself dry that New Year’s Eve for all the moments in the coming year, and every year after, that my mother would never get to see. People said I was so stoic at the funeral, but really it was because I had exhausted myself the night before. I remember almost physically attacking a security guard for suggesting they might confiscate the last Christmas present my mother ever gave me, all because, unthinking, I made the mistake of having it with me in my carryon, instead of packing it in my checked bag. I just had to keep her close.

Trump’s actions have me veering between rage and tears. But I’m tired of his ugliness dominating my worldview. I would love to instead turn that into beauty. I would like us Americans to take this moment to step away from anger, contempt, and hurt. Instead, let’s do as Debbie Dingell said and set politics aside. Let’s show each other some love and support. Let’s do more than talk about it. Let’s do something concrete.

This year, I will be sending a holiday card to Debbie Dingell to show my support for her in what may be the hardest holiday season of her life and maybe help her heal a little from the wounds Trump has inflicted. I want to show her that Americans can still come together and be kind. Please join me. It doesn’t matter whether you are from her district, from her state, or even know her at all. This is a widow who has been attacked in a moment of extreme grief. Let’s bury her offices in an avalanche of cards showing that Americans still care about our fellow human beings.

I’ll be sending my card to Debbie Dingell’s Dearborn office. Here are all her office addresses:

Thank you. May all of you have happy holidays, filled with peace and light, not grief and rage. Whatever this season may bring, may you always have the support and love of others to help you through the bad and enjoy the good.